The Pact, embraced by nearly 200 countries at COP26, provides for actions to increase resilience to climate change and curb greenhouse gas emissions, as well as financing for both.

Tegucigalpa, April 25th, 2022.- As part of its commitment and support for global efforts to adapt to and mitigate climate change, the Central American Bank for Economic Integration (CABEI) Assembly of Governors approved the multilateral Bank's Declaration of Commitment to the Glasgow Climate Pact, agreed by the United Nations Framework Convention on Climate Change (UNFCCC) at COP26.

Through this Declaration, CABEI reaffirms its support on issues such as science and global urgency, financing for climate change adaptation and mitigation, technology transfer and capacity building, loss and damage, implementation of the global climate agreement and the call for global collaboration, among others.

"Environmental sustainability is one of CABEI's strategic axes through which it promotes the approval of programs and projects that address the need to preserve the environment, which is why we are very pleased to approve this declaration with which we reaffirm our role as the region's Green Bank, promoting actions and specific financing that promotes mitigation and adaptation to climate change in the Bank's member countries," said CABEI Executive President, Dr. Dante Mossi.

This commitment is in addition to two more Declarations welcomed by CABEI in 2016 and 2019, the first one established its commitment to promote and support climate change adaptation and mitigation actions so that its member countries could achieve the goals established in the COP21 (Paris Agreement); while the second one, called "Zero Coal Declaration", established the Bank's commitment to refrain from financing projects related to coal exploration and extraction and coal-based energy generation.

In compliance with this commitment, CABEI has achieved that 41% of the approvals generated between 2015-2021 were related to climate change projects for the amount of US$6,969.1 million, as well as mobilizing more than US$1,180.5 million in resources from strategic partners to finance these types of initiatives. Among them, the Green Climate Fund (GCF), with whom it has been possible to approve four co-financing operations for US$525.2 million and three technical assistance operations for US$2.0 million.

CABEI has also increased its participation in ESG ('Environmental, Social and Governance') bond issuance through green and social bond issues, which in the last two years have totaled US$1,676.6 million; it also has a US$17.5 million Climate Change Innovation Project Preparation Fund available to the countries of the Central American region and soon expects to issue its first blue bond in the capital markets.

CABEI contributes US$2.5 million for initial capitalization of the Climate Change Investment Fund
Back 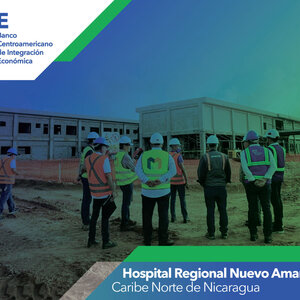