The last section of the four-lane road completes the 95.87 km of the CABEI-financed logistics corridor. This highway strategically connects the northern region with the south of the country, contributing to the goal of becoming one of the main logistics centers in the region.

Tegucigalpa, January 17, 2022.- The Villa de San Antonio - Goascorán Logistics Corridor in Honduras is an integrationist initiative that, since its inception, has been supported by the Central American Bank for Economic Integration (CABEI).

The total project, including the three sections, has a physical progress of 99%. In July 2019, the construction of sections II and III was concluded; while section I, is composed of subsections IA, concluded in December 2014, and IB, which is being concluded to complete the 95.87 km of four-lane roadway that covers this corridor.

CABEI Executive President, Dr. Dante Mossi, emphasized: "The Dry Corridor is one of the most emblematic works for CABEI and the region, as it allows for significant savings for the population and the countries that will use the project, in addition to the road infrastructure projects that have been financed by the Bank to improve the quality of life of Hondurans and the competitiveness of the countries."

CABEI's sovereign public sector manager, Manuel Torres, explained: "the last segment of the Dry Corridor is already in service and cuts approximately 100 km from El Amatillo to the Comayagua Valley, which will reduce costs and time and make exports more competitive, not only for Honduras, but for the entire Central American region that uses Puerto Cortés."

"This corridor was designed as an alternative to the Panama Canal for handling smaller cargo volumes and connects Puerto Cortés with the southern part of the country, connecting to El Salvador through the El Amatillo customs office and to Nicaragua through the Guasaule customs office," explained the director of the Honduran government's executing unit (Invest-H), Ester Alemán.

Alemán, from the executing unit, added that "having CABEI as an ally in these projects is relevant to have the necessary resources for the required investments, bringing benefits to the users".

CABEI has contributed to the construction of the Dry Corridor by financing US$328.5 million of the estimated US$406.8 million cost of the project.

A project for Central America

The general objective of the road project is to promote the economic and social development of the area ―oriented to agricultural production and highly vulnerable to climate change―, of the country and of the Central American region by improving trade between the countries of the region, the reduction of vehicle operation and maintenance costs.

The project has generated employment for skilled and unskilled labor during its execution, in addition to the direct benefit to the inhabitants of the departments of La Paz, Comayagua and Valle, which make up the "Dry Corridor" and 15 border municipalities that present high levels of of poverty and vulnerability in the region.

With the operation of Sections I, II and III, positive impacts have already been registered, according to Juan Ramón Castro and Mario Gómez, two beneficiaries of this project: "Who would pay so much for a piece of land here that didn't even have streets? Now these are worth gold, nobody sells, everyone wants to buy, and it has favored the people," said Gómez, while Castro thanked CABEI "for trusting us".

Also, as a result of the construction of the Dry Canal, the Soberanía Nacional School was rebuilt in the community of Caridad, department of Valle, in the south of the country, including the construction of larger classrooms, sports fields, a kitchen area, drinking water, a pedestrian bridge and other services to guarantee adequate conditions for education in that locality.

The school's director, Nivia Celenia Romero, stated: “in the previous facilities we were in a single classroom for all six grades, we had terrible overcrowding, we did not have the necessary pedagogical conditions to be able to function, rather it was a danger because the school was in a ravine.”

“We thank CABEI for all the support they have given us, we have attracted children from other communities and for us it is extremely satisfying to have the new facilities,  for the students, parents and teachers who work in this educational center. ”, he concluded.

Other complementary works in various municipalities, access to the urban area of ​​Aguantequerique and the construction of bridges over the Yurina and Apane rivers; the pedestrian underpass in San Juan; and access works in Calendaria.

The Project as a whole has an impact on the Strategic Axes of Human Development and Social Inclusion, as well as Sustainable Competitiveness of CABEI's 2020-2024 Institutional Strategy. In turn, it is framed in the Country Vision 2010-2038 and the National Plan 2010-2022 of the Republic of Honduras. 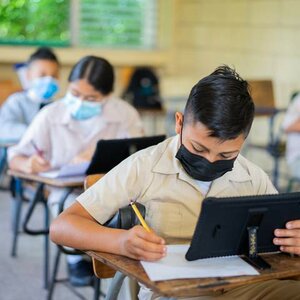