The financial support of CABEI and ICO to the region from 1991 to date amounts to US$252.4 million; the most notable contribution has been providing support to MSMEs.

Tegucigalpa, February 22, 2019.- The Central American Bank for Economic Integration (CABEI) and the Spanish Official Credit Institute (ICO) signed a loan agreement for an amount of up to the equivalent in dollars of EUR 80 million, which will be aimed at financing investment and liquidity operations to promote exports and imports of Spanish companies in the Bank's member countries.

The contract, which was signed today in Madrid by CABEI Executive President, Dr. Dante Mossi, and ICO President, Mr. José Carlos García de Quevedo, will enable CABEI to channel resources in order to increase commercial exchange between Spain and the Bank's member countries.

At the ceremony, President Mossi recalled that since the 1990s both institutions have worked to help strengthen the relationship among CABEI, Spain and the Central American region.

Financing to companies will be channeled either through the Intermediary Financial Institutions established in these countries or directly to specific projects through CABEI. A part of the resources will be used to partially finance the Six Lane Expansion Project of the Las Playas Corridor, Section I La Chorrera-Santa Cruz in Panama; a work that will benefit the development of strategic zones of the country.

An approach that promotes the Central American region

Honduras, Spain and CABEI work towards the sustainable development of the Honduran people

Landfill Inaugurated in Honduras
Back 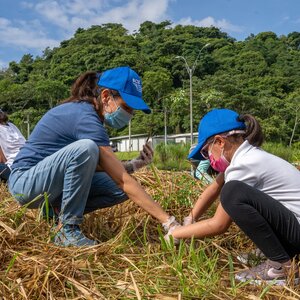